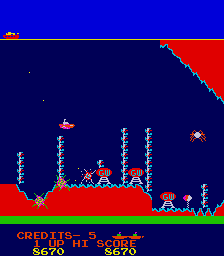 Battle of Atlantis is a scrolling shooter arcade game released by Game World Manufacturing / Comsoft in 1981, similar to "Scramble". It was designed and programmed by Andy Thomason. Gameplay The mission of the game is to finish the six tables (levels) by shooting enemies. Through all six tables, build up your bonus by blowing-up the fuel tanks. Table 1 : Avoid and destroy the floating mines. Table 2 : Exploding sharks appear as well as the destroyers. Table 3 : A cavern where octopuses lie in wait. Table 4 : A complex of towers replaces the lower part of the cavern. As well as the destroyers and octopuses, the mines reappear in large numbers. Table 5 : Accelerated version of Table 4. Table 6 : You return to Table 1 in an accelerated version.

Battle of Atlantis is a Scramble variant set under the sea. You control a submarine with both a forward shooting laser and a bomb which will take out objects slightly in-front and below you. The laser can be angled up and down by moving your vessel in the appropriate direction. Your only aim is to take down as many of your enemies as possible before your lives run out.

The entities that are bent on your destruction include mines, which slowly float to the top of the water as you approach, fast moving sharks, randomly wandering octopuses and ships that drop depth charges on you from above.

Reviewer: Ixion73 - favoritefavoritefavorite - December 14, 2018
Subject: Pretty good for a Scramble ripoff
Even though it's pretty much just Scramble underwater, don't write off Battle of Atlantis. The biggest (perhaps only) difference is that you have three-way directional firing in addition to your torpedoes, both of which can create a ton of destruction. You also get attacked by seacraft from above, which is another difference from Scramble. Nice tune at the beginning and decent graphics for its time. If you like side-scrolling shooters, Battle of Atlantis is a must-try.